As we moved into Day 2 of the Tough Man Competition, only 12 of the original 24 competitors remained.

(To be honest, it was only 11. One of the competitors missed the event because he forgot what day of the week it was.  I am not saying he thought Day 2 was on a Friday and it was on a Thursday. I am saying he thought the day of the week he was actually living in was a Wednesday, meanwhile the rest of the country was living in Thursday. It must be nice to be in college.)

Without any pep talks or briefings, we moved right back into the competition.

Two names were pulled from the hat.
The card was picked to designate the event.
The coin was flipped.

We went to work.

This is the second straight time Ted Clohessy has won this competition.
He is clearly one of the best competitors I have ever trained, coached, or competed against.

He is definitely not the fastest or the strongest athlete in our program, but he will not allow himself to lose. 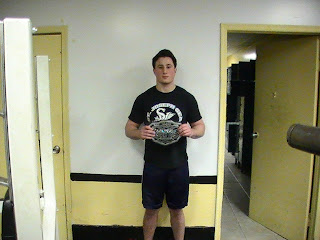 
Rookie of the Year - Ryan Pearce

Even though I coached Ryan in football for 3 years, I had no idea he was so competitive.

I started to see his competitive side during the winter sessions, when he kept beating everyone (including me) in the static ring holds.

Even though he is only in high school, he put up a great fight against Clohessy in the FINALS.